Mineralogical and geochemical evolution of the Bidgol bauxite deposit 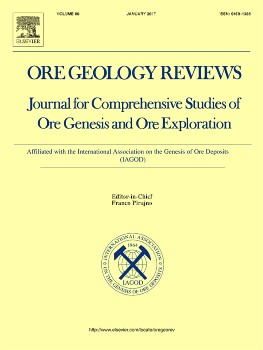 The present study focuses on the Late Cretaceous Bidgol bauxite deposit in the Zagros Simply Fold Belt, SW Iran. The orebody is located in the eroded major NW–SE trending Koh-e-Hosseyn anticline and hosted as discontinuous stratified layers and lenses within the upper member of the Cenomanian–Turonian Sarvak Formation. Detailed mineralogical analysis reveals that diaspore, hematite, goethite, anatase, clinochlore, chamosite, and calcite are the major mineral components accompanied by minor amounts of detrital and REE-bearing minerals such as rutile, zircon and parisite. The ore texture suggest that the bauxite material has an authigenic origin but in some parts it has been transported short distances from a primary in situ environment and redeposited in karstic depressions. The spheroidal pisolites of the Bidgol bauxite formed under conditions of low water activity, favouring the formation of large diaspore cores and a single dry-to-wet climatic fluctuation. The mass change calculations relative to the immobile element Ti show that elements such as Si, Fe, Mg, K, Na and Sr are leached out of the weathered system; Al, Ni, Zr, Ga, Cr and Ba are concentrated in the residual system; and Hf, Ta, Co, Rb, Cs, Be, and U are relatively immobile during the bauxitisation processes. The Nb, Th, Y, V, Sc, Sn and ΣREE are relatively immobile in the initial stage of bauxitisation processes in the bauxite ores, but were slightly mobile at the later stage of bauxitisation. Geochemical data reveal progressive enrichment of the REE and intense LREE/HREE fractionation toward the lower parts of the bauxite profile. Cerium behaves differently from the other REEs (especially LREE) and show positive anomalies in the upper horizons that gradually become negative in the deeper parts of the profile. The distribution and fractionation of trace elements and REEs during the bauxitisation process in the Bidgol deposit are mainly controlled by the presence of REE-bearing minerals, fluctuations in soil solution pH, REE ionization potential and the presence of bicarbonates or organic matter. Geochemical analyses confirm a protolith contribution from the bedrock argillaceous limestone and suggest that the source material for the Bidgol bauxite was provided from a siliciclastic material derived from a continental margin. The mid-Turonian uplift led to the formation of karstic topography, rubbly breccia and a layer of ferruginous–argillaceous debris that was affected by lateritic weathering under humid tropical climate. Subsequently, mobile elements are removed from the profiles, while Al, Fe and Ti are enriched, resulting in the formation of the pristine bauxite materials. When the platform subsided into the water again, the pristine bauxitic materials were partly converted to bauxite. During the exposure of bauxite orebodies on the limbs and crests of anticlines and subsequent eroding and accumulation in the karstic depressions during folding and faulting in Oligocene–Miocene, important factors such as intensity of the weathering, drainage and floating flow may have improved the qualities of the bauxite ores

Where To Find Us